Travelling with a teenager – A glimpse into our bus-life 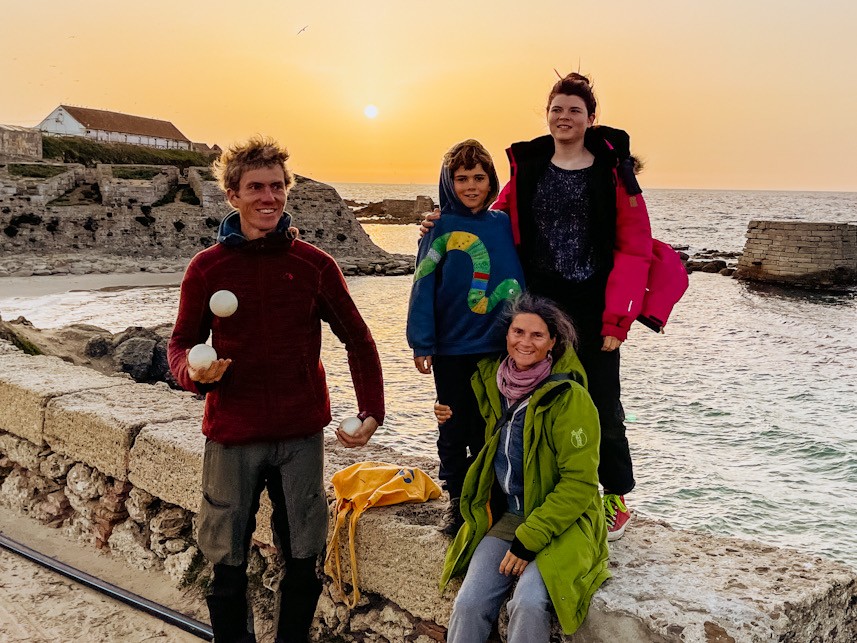 Traveling with teenagers. Sometimes I think she must be in love. How else can you type away on a cell phone with so much stamina, endurance, enthusiasm and verve?
The tight grip on my heart that tightened every time my daughter spent hours helping herself to her tech device has loosened a bit.

Dear parents, do you know this agony when the child sinks into these few square centimeters? Or have you been for a long time? Do you know this reflexive reaching for the cell phone? How much of life takes place in there and how much around it?
Here on our journey, which has so far taken us from Germany via the Netherlands, France, Spain to Portugal and back to Spain, we often come across pictures of people sitting together in a restaurant, each with a cell phone in front of them. (I’ll just take the liberty of using one form here…) Even the viewing of sunsets, which has become a ritual, is perceived by many fellow viewers through their screens. And was I mistaken the other day when my daughter, sitting in the passenger seat, had her cell phone in front of her on the dashboard, and she was looking at the surrounding nature through her screen?

The cell phone issue is sometimes the main point of contention between my (almost) 14-year-old daughter and me. Since I understood – I’m already 45 years old and a bit behind the times – that she uses her cell phone almost exclusively for her social contacts (of which there aren’t 100, apparently), I’ve relaxed a bit. There is little of that on this trip for my child. Most families travel with younger children. To be more precise, my daughter’s living space is limited to about 5 square meters, which she shares with her Kung Fu-enthusiastic 8-year-old brother (this is mentioned here because this art is also practiced on these few square meters, but also in pedestrian zones, on beaches or parking lots, much to the chagrin of her sister). In addition, there is still the 38-year-old bonus father, who embarrassingly besides the kung fu panda (mind you, it is a self-rehearsed kung fu…) from the family still brings out his juggling balls at every corner and contributes his remaining to the show. And just me. Woman behind the moon, who also still wants to practice yoga on the 5 square meters.

Now we have spent the last 2 months in Portugal and the teenage child has been bored after initial joy above all. In between was a friend visiting from Germany – so not just any friend but THE friend who has been by her side since the beginning of her life and probably just hangs at the other end of the line in front of her few square centimeters of screen.
To counteract the boredom we have to offer only bathing in the moonlight under the stars in central Portugal, which is positively received. Including half a day chopping wood and making fire under the outdoor bathtub included. (See also the last blog article here ….) When the boredom in the “wilderness” becomes too great something else must come. Even Lisbon, a city in which I finally do not feel like a foreigner (or alien), but which draws me with its colors, alleys and especially different cultures immediately in its current and spell, is perceived as boring. Especially because it’s not cool at all to move with his family through this city, especially since the bonus father runs around so tattered (I mean: sorry, we just live grad “only” in a bus), that he is addressed within 30 minutes 4x of dealers.

No. We don’t want to buy anything. We want to stay clean. And really clean. How this longing complicates finding a place to live on this planet, you can read in another post….

So. back to boredom. This is somewhat alleviated by surfing, riding and a deep reach into the wallet.

Okay. We have understood. The journey must go on. Even though Lukas and I would like to get to know many more people, projects and communities in Portugal, we realize that it’s time for our family and travel dynamics to move.

And we decide together to drive our little blue bus to Georgia, there to ride with a friend through the steppe ( Annette’s really great website can be found here) before we then want to pilgrimage another 801 km in Turkey.

When I think about it and make plans, my big child, who is almost no longer a child, comes to life. It’s just stupid that now of all times our bus doesn’t want to move and the fan belt has to be changed. Okay. We stay a few days in a tent – mind you the only one on this campground – in the Algarve, where we are lined up like sardines, between motorhomes that are as big as ships. Big ships. As my husband notes, the motto here seems to be “accumulate a maximum of matter in a minimum of space.” I deal with my self-esteem while squatting on the ground next to these possessions preparing our meal (which is paradoxically more nutritious and worth more than all the other dishes there beside us). My teenage girl spends 3 days on the toilet, as there is the only electrical outlet far and wide. It’s not until we leave that she realizes there was one at our site and electricity is included. This is a bit of a shock for her. Because despite social, digital contacts it was then probably not so nice on the toilet…

Our bus is ready. We pick him up to go directly on to Spain. We want to take 14 days to Greece. At the workshop we leave a painfully large part of our travel savings to find out 300 km further on that a warning light is flashing. My good husband, who drives the bus and manages this part of our life together, looks under the hood but doesn’t think it’s necessary to visit or stop at a workshop. Since I sit in the back with our son, I get only another 400 km later that the warning light is red and arrange that we immediately drive to a workshop….Hinter I am challenged not to enter into my well known reproach number and practice in sympathy and understanding.

No, it is not simply due to my husband’s naivety. It is also the situation that has just arisen on these days in our family. A lot of quarrels between the children, a high tension and a great pressure to take care of the children and the atmosphere in the family NOW. So that the kung-fu panda doesn’t destroy the bus from the inside and the teenage child with the few cm2 of electronics in his hand doesn’t run away.
Phew, there is a lot to hold, to appease, to clarify and to calm down in these two days. When the information comes to me that there is oil in the cooling water I have to calm myself down as well and love to watch how my mind drifts into future scenarios and my breath brings me back to the here and now. Again and again.

We don’t know if it’s already too late for our engine. We stand with the bus for two days in an industrial area in southern Spain between huge cranes and tanks. An emergency stop, only a few hundred meters away from the next workshop, which only opens again on Monday.

The utterly amazing thing: Although we don’t know if we will keep our bus or if it will be ground to scrap to add to the huge pile of junk next to us, although we don’t know if we might have to continue our journey on foot or even abort it because we are exchanging our money with the labor of car mechanics, the kids are in the best of moods! Our teenager looks quite happy and remarks : “Finally something is happening!” We spend a beautiful day between factories at industrial harbors, can cook quite comfortably on the sidewalk (this picture of my son with diving goggles on his eyes cutting onions I will hopefully always keep in my heart) and even take a very cozy nap in our shared bed. In the evening we measure our physical strength and because a pack of Toffifee stands against a cell phone-free day, my daughter outdoes me and does more than 200 jumping jacks…

The next day we explore the area by bike. And are horrified. I have seen a lot. Slums in India, port districts in Bangladesh. But I was not prepared for such misery and filth in the “western” world. One plastic film greenhouse is lined up kilometer after kilometer after another. In between, squashed vegetables, factories, trucks, cesspools, dirt and poor people-often refugees who work here for far less than the minimum wage. In these “greenhouses” is created (grows…if you can call it that here) actually the vegetables and fruits that we find highly polished in (not only) German supermarkets. Guys I tell you: Disgusting! Stop eating non-organic vegetables! Stop eating vegetables from Spain!

With love from Nirmala💜

PS. Since the area just described is still in our bones we have retreated to the Sierra Nevada National Park. After another two days of repair the bus is driving again…